Background and research of Organic THinking

From O'Neil's Work-book to the Philosophy Of Spiritual Activity: Seven fold human being method in writing used by Steiner!

If you are already familiar with Rudolf Steiner's books, lectures, Calendar of the Soul, then you can jump right into George O'Neil's files which I will explain below. If you are new to Rudolf Steiner and organic-thinking the best place to start is The Logik of the Heart: the organic templates of spiritual writers, Rudolf Steiner and the Philosophy of Freehood. Let us look at this relatively unknown stream of Anthroposophical thinking and writing.

George O'Neil lived an amazing life, the son of a wealthy patron of James Joyce, Pound and other writers, he traveled Europe spending time with the expatriate circle in Paris, receiving piano lessons from George Antheil, bobsledding and boxing with Ernest Hemingway, having a chapter written about him (An Irishman among Brahmins in "A Philosopher's Holiday")  by Irwin Edman of Columbia University. Wow, what a beginning!

Always looking for the spiritual, George made his way to the Steiner's headquarters as a young man where he became friends with Gunther Schubert a close associate of Steiner in Dornach, Switzerland.

George asked himself the question concerning what living thinking was, hot on the scent of  Steiner's promise that a new thinking was hidden in his books for his followers to find. The  result is George's outlining of Rudolf Steiner's new thinking in Steiner's Philosophy of Freedom. The resulting manuscript was: A Workbook to the Philosophy Of Spiritual Activity. [There is also a Part II and Part III to the manuscript.] O'Neil presents his signature wave-like diagrams of each chapter thereby illustrating the living interrelationships of enhancement, polarity, and inversion i.e., the laws of living structures according to Goethe. Just viewing them is impressive.

George was tireless in his research of Rudolf Steiner's manifold compositions in his books and lectures. George's mimeographed study guides include An Outline of Occult Science, Theosophy, Calendar of the Soul, and countless articles. His Calendar of the Soul translation stays close to the German structure and reflects George' commitment to keeping the form and content in harmony with the original German.

George wrote for example  book reviews on an Owen Barfield book or on a recently translated Steiner book. George was the first writer after Steiner to compose consciously his articles in the new heart-thinking style. Of course, Mr. O'Neil after having internalized and mastered Steiner's new thinking,  was, by way of these study guides and articles, always attempting to bring others to this new thinking. Tough job as American anthroposophists were stuck in pragmatism and 1960s social concerns, and basically not drawn to developing inner quiet and meditation.

'Spirituality made useful' could have been George's motto as is seen in his book  The Human Life. In it, George organically culled together pertinent Steiner quotes and perspectives weaving them into a coherent whole, making clear the archetypes and invisible forces affecting the ages and stages of the human biography.  It is the first practical biography study guide based on  anthroposophical cosmology and at the same time completely artistic and user-friendly. It comes with a life-chart in which one records one's life-events on four leveled life map (seen below). The process leads to a magical overview or organic-living perspective of the interconnectedness of our seven-year cycles. 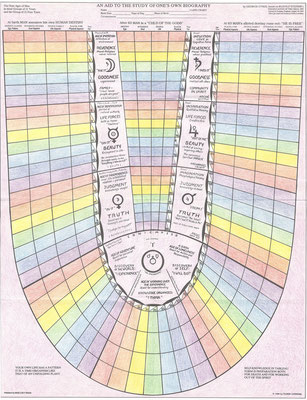 George produced some of the best writing and diagrams for Rudolf Steiner's Knowledge of Higher Worlds and Its Attainment. Originally printed in a newsletter, a photo copy is available here. Although left unfinished on purpose, it is still an amazing achievement compared to the writings of other Anthroposophists, even in its incomplete form.  Again, George brought his imagination to full use by making the book and its exercises easily digestible to all.
The Language of Graphic Form by O'Neil is one of the few essays about Steiner's letterheads and symbol use. Again,  O'Neil made ground breaking insights ignored by the so-called polite Anthroposophical Society which rarely could embrace such original work.  Steiner often used symbols which represent the interplay between the older generation leading the younger generation into spiritual life, a non-reality within the Society as few anthroposophists stick with the necessary self-transformation that is the ripe fruits of meditative life and old age.  This gap of missing-wise-people is a great tragedy as the anthroposophists tend to buy their steak for the sizzle i.e., having a great building in Switzerland is more important than having individuals committed to inner development. Like-minded attract and the O'Neil types and other initiates retreat into the background.

Florin Lowndes has kept George's work alive since 1988. Lowndes being a "Monumental artist" by trade, was a good partner for George's work on the organic thinking. Lowndes took on the task of publishing The Human Life which he finished and edited. It is now available in many different languages and has become the standard work for biography study.

Lowndes turned George's research of Knowledge of Higher World's and the famous Six Subsidiary Exercises into The Enlivening the Chakra of the Heart (original German title: Die Belebung des Herzchakras) which was de facto rejected by Steiner Press in America, but accepted for translation in England. Landed Anthroposophical leaders display a quasi-paranoia of systematic approaches to Steiner's work, and Anthroposophical Press is no exception. What a joke to be rejected by your anthroposophical peers. It has been translated into 13 languages, a very unusual phenomenon for a Steiner oriented book.

In 1998, Lowndes came out with Das Erwecken des Herzdenkens, a book covering all aspects of Steiner's organic writing style, even into the level of Steiner's sentences. The book comes with colored diagrams and contains every utterance Steiner made pertaining to this new thinking. In spite of the countless quotes, there was so little interest in Steiner's compositional style that the book never sold like the Human Life and The Enlivening of the Chakra of the Heart. (Lowndes shared that while teaching in Germany many attendees of his seminars thanked him for going over the rudiments of Steiner's seven-fold human being, a dogma of anthroposophy that most should know or at least be very familiar with!)

Lowndes has always been on a personal mission of saving the new thinking for the coming generations. He published his own German editions called code-X in which the form of Steiner's writing is highlighted while at the same time these editions preserve the integrity of the original structure of the editions published while Steiner could oversee them (pre-1926 editions). Lowndes' code-X is an amazingly beautiful series of editions of Steiner's original books. It may come as a surprise but much of the form of Steiner's work has been compromised  by later German and Swiss publishers, and has been universally distorted in nearly all English translations. A solid article about Steiner's particular writing style and the significance of his punctuation was published by Gerald Reilly in his Towards Rudolf Steiner's Use of Language and Structuring of a Text.  (On a personal note I have translations of Philosophy of Freedom and Theosophy that reflect Steiner's exact sentence and paragraph count, for those who would like a copy.)

Lowndes has also published some fascinating articles about Steiner's writing structures in Complete Edition #2 Goethean Theory of Knowledge, about NDEs and the new thinking, and about the anthroposophical view of art (The Struggle: Expressing the Spiritual in Art). Lowndes brought a new artistic clarity to George's work and devoted his seminars to making this work intelligible to a modern audience. His website http://www.heartthink.org/ advertises his seminars and art projects based in this new thinking. (As an aside, his partner Sylvia Weyand has taken Eurythmy to a whole new level.)

I started off learning and practicing this new thinking in Tuebingen, Germany at the student dormitory called Fichtehaus in 1993. In those days, there were over ten anthroposophical study groups. Lowndes gave his first public workshop there, and we had two study groups focusing solely on the 1918 Preface to the Philosophy of Freedom. It is through this text that I learned the basic thought-forms of Steiner's work (and its sister text the Second Appendix). It was such a blessing to have Lowndes as a teacher, being the only anthroposophist on the planet who could consistently answer questions about Rudolf Steiner's new thinking.

This short Preface 1918 contains so much information about the new thinking and is glossed over and misread by many, especially since the English translation can be ambiguous. The Preface 1918 taught me that every sentence has a place in the composition of the paragraph. If you change/omit a sentence, as translators have done, you begin the distortion of the meaning. Some say that this is a "rigid" stance but imagine if editors did the same to great poems or Shakespeare plays. For those interested in starting with these text I provide the PDF here called A Study Guide for Rudolf Steiner's Heart-Thinking, a booklet which contains the basics on how to study the Prefaces as well as all of the major Steiner quotes about how he wrote his books. It is a good place to start in addition to my Youtube videos about O'Neil and Lowndes' work the Philosophy of Freedom.

With this new understanding of what Steiner was doing in his written works, I went on to complete my dissertation (An Outline for a Renewal of Waldorf Education) on how this four-leveled thinking is at the very basis of Steiner's Waldorf School. Interestingly, aspects of this project were picked up by some Waldorf Schools but never the new thinking that lies behind it.

Fully enthused about this new thinking, I found myself translating "The Education of the Child in light of Spiritual Science", an introductory essay by Rudolf Steiner written before there was a Waldorf School. I thought by showing the essay's organic forms, teachers would have a special 65-paragraph meditative study. (The form and inner structure of Steiner's essay is mathematical brilliance.) I renamed Steiner's essay A Primer for Spiritually Thinking Educators imagining that it could become a booklet for all new age seekers in education. I gave an introduction to the new thinking and showed how even at the sentence level, organic forms are wonderfully detectable.

If there is a universal new organic thinking based on the seven-fold human being, then Rudolf Steiner must have not been the only person to use it. George researched many classic texts in search of the patterns and organic structures used by Steiner. He found Lincoln's  Gettysburg Address and The Scarlet Letter had a Steinerian form - two outstanding classics of American culture. Lowndes also collected advertisements from magazines  concluding that this new thinking was known by corporations using  this spiritual method of writing for "the dark side." We know Steiner himself referred to parts of Hegel, Our Father Prayer, and other works for their organic forms. It is interesting to note how Steiner altered the Catholic Mass and made the Christian Community Act of Consecration of Man which is full of organic thought-forms. There is surprisingly a booklet by the Christian Community Priest, Hans-Werner Schroeder on the heart-logik-patterns of the Gospel readings. And the Bible is itself full of organic structures according to Bullinger (Companion Bible) leaving one to wonder why the Christian Community, outside of Schroeder, has produced no scholarship in this light.

In my recent book, The Logik of the Heart: the organic templates of Spiritual Writers, Rudolf Steiner, and The Philosophy of Freehood I collected significant poems, bible chapters, Plato, Emerson, prayers that contain organic forms. Another aspect of the book is a detailed study of Steiner's writing structures. Most essential are the suggestions on how to run a study group which are both fun and challenging. It is a great experience to live organically into a thought-form with others.

Currently I lead several online study groups on Theosophy. I hope that those looking for a deeper experience of Steiner's work will join. This is my commitment.